READING ON THE CEILING

To keep his books Cosimo constructed a kind of hanging bookcase; sheltered as best he could from rain and nibbling mouths. But he would continuously change them around, according to his studies and tastes of the moment, for he considered books as rather like birds and it saddened him to see them caged or still.
– Italo Calvino, „The Baron in the Trees“

The result of a Summer residency at the Vorwerk-Stift Künstlerhaus, Hamburg, „Reading on the Ceiling“ gathers a group show, an evolutive library and a radio broadcast. On this occasion, the Vorwerk-Stift’s gallery and artists’ house garden will be a site for visual, spatial, sound and editorial experimentations, a dialogue between various practices coming together for the duration of the event. In the spirit of fruitful exchanges, the reading room, exhibition space and sound space are cohabitating, each one offering fresh material to the others, through a process of constant circulation between each of these sources for reflection.

Myriam A. Goulet questions the exhaustion of the ceramics mould through its physical and metaphorical limitations; Xavier Aupaix produces a series of textual and pictural reproductions focusing on the globalized economy; Dieudonné Cartier pursues his exploration of archaeological remnants in light of the resurgence and reminiscence of images; Béatrice Lortet proposes a sum of images, drawings or paintings, fragments of her practice she composed as a stock that will engage with the exhibition space; appropriating the notion of translocation in genetic chemistry, Guillaume Sinquin explores the ideas of rupture and reparation, presence and absence.

La Houle (Marie Lécrivain & Jean-François Caro) is setting a Reading Room composed of contributions (books, multiple, sound documents, and so on) coming from artists, authors, publishers, resulting from exchanges and from donations that occurred during the previous events, and others freshly collected. A space for reading and thinking, but also for dialoguing with the participating artists, with their own readings and research.

ICIPerformance (Julie Rouanne & David Le Simple) will record a live radiophonic version of „Reading on the Ceiling“. The collective will invite the participating artists and Hamburg visitors to collect or create sounds and images that will be broadcast live.

Ronan Le Creurer will present an installation/performance – a flying-sculpture activation – as the launch of the second volume of „Over the Line“, a postcard and stamp series edited by La Houle.

Since two years, Julie Rouanne and David Le Simple have been producing Qu’est-ce que je vais faire de vous maintenant que vous existez?, a radio broadcast questioning the notion of artistic and non-artistic gesture by probing sound as form in order to discover the why and how of things.
For the Reading on the Ceiling exhibition organized by La Houle at Vorwerk-Stift, the next show will be recorder live during the event, on Saturday, September 2, from 2pm to 6pm, and we are pleased to invite you to take part to the live open mic from 3:30pm, or to attend to recording sessions on Thursday, August 31, from 6pm to 10pm, or Friday, September 1, from 2pm to 6pm.
Several kinds of participation are possible:

1.
Volunteers may participate in our “Attempt at exhausting an exhibition space”: we are inviting you to describe as precisely as you can – in the manner of George Perec (cf. https://en.wikipedia.org/wiki/An_Attempt_at_Exhausting_a_Place_in_Paris).
This will be an attempt at creating a sound version of Reading on the Ceiling that’s focused on details and on spaes.

2.
Participants may respond to a series of images will be displayed in our miniature studio :
Une histoire de l’écoute radiophonique, a drawing installation by Julie Rouanne.
A series of works selected by Belgian artist Sylvie Eyberg around the theme and notion of ceiling.

3.
Participants are also invited to engage with the books displayed in La Houle’s Reading Room for reading, commenting on or explaining them.
You may of course bring your own images and texts to the recording session – all propositions are welcome.
This radio show will be collective, or it will not be!

Listen to the previous shows here : 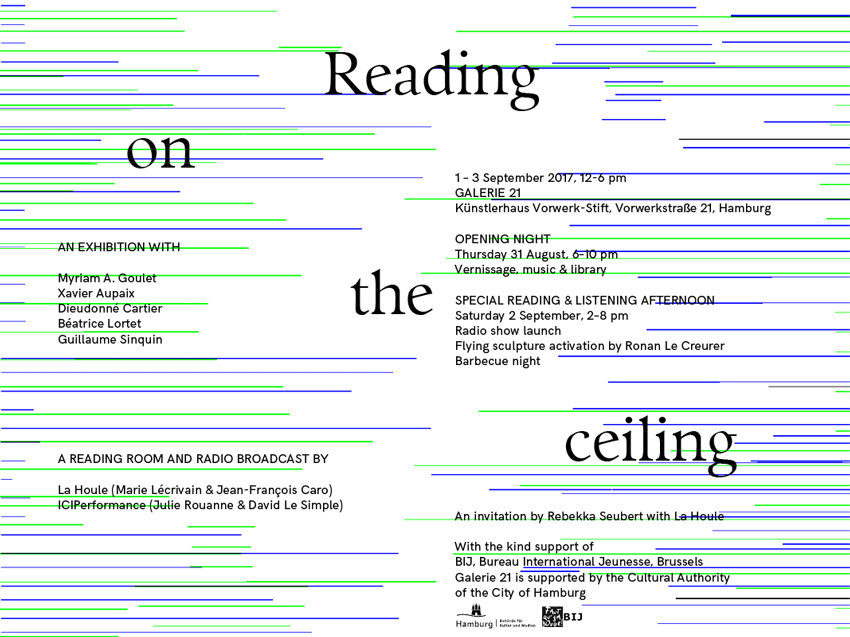 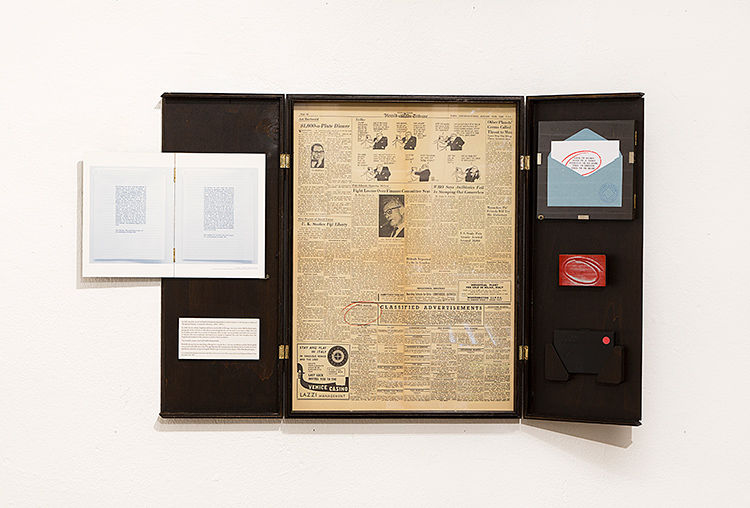 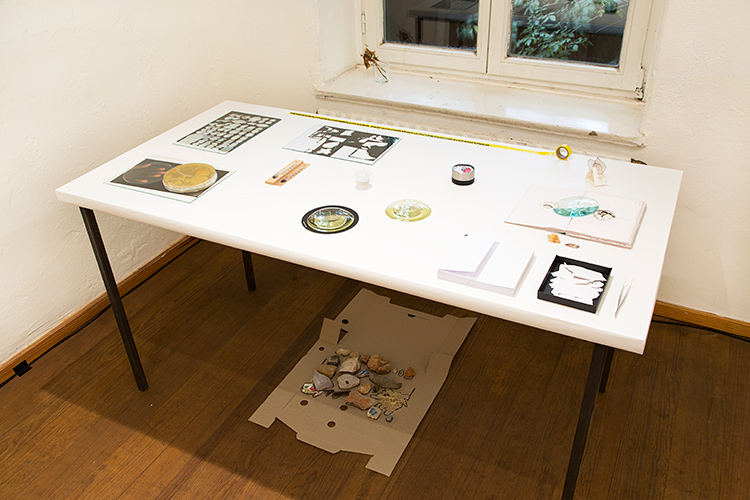 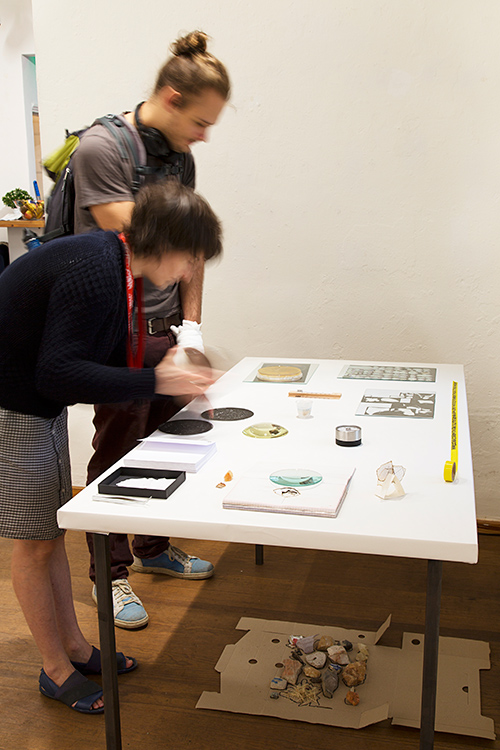 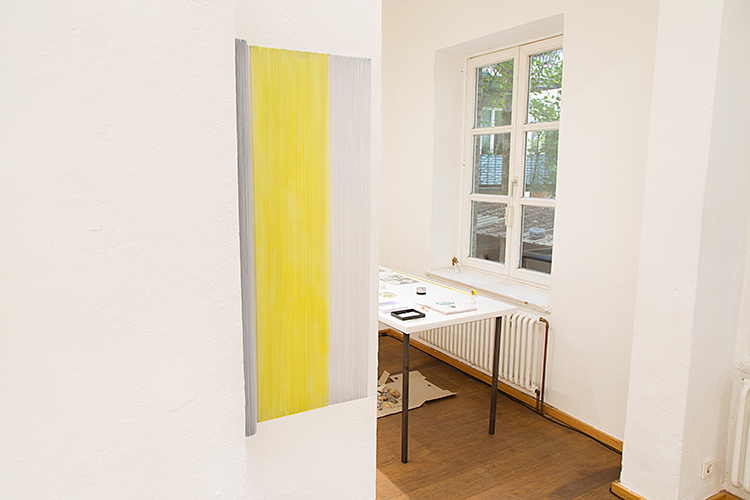 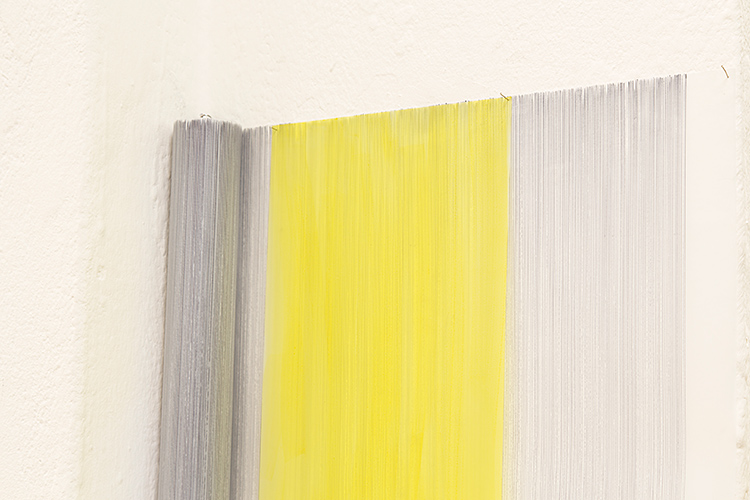 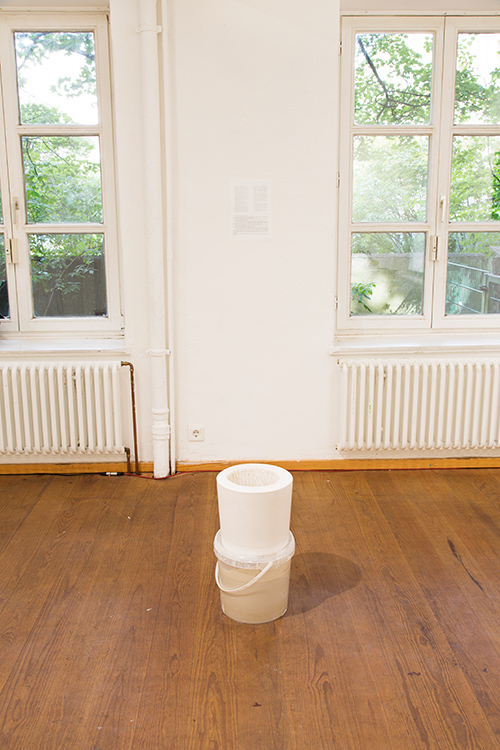 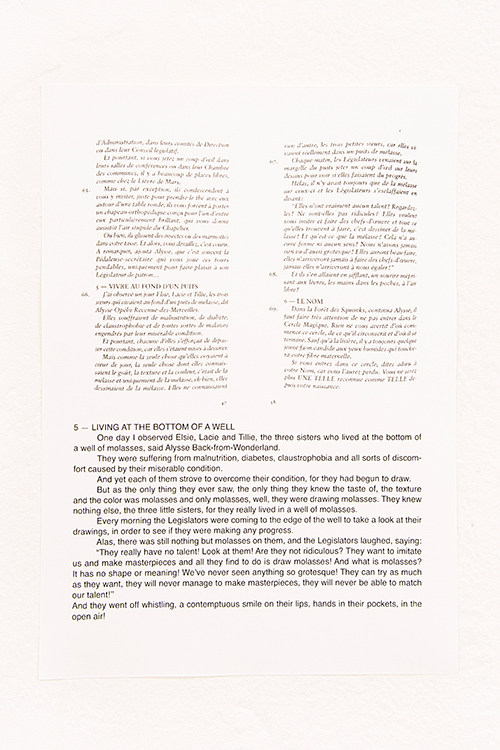 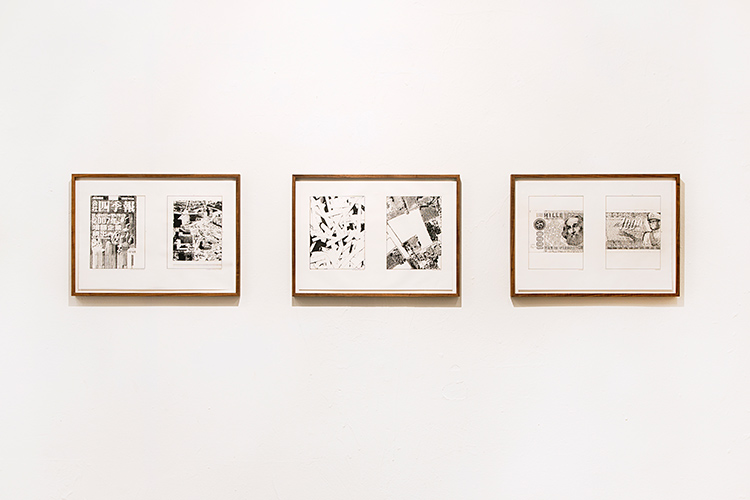 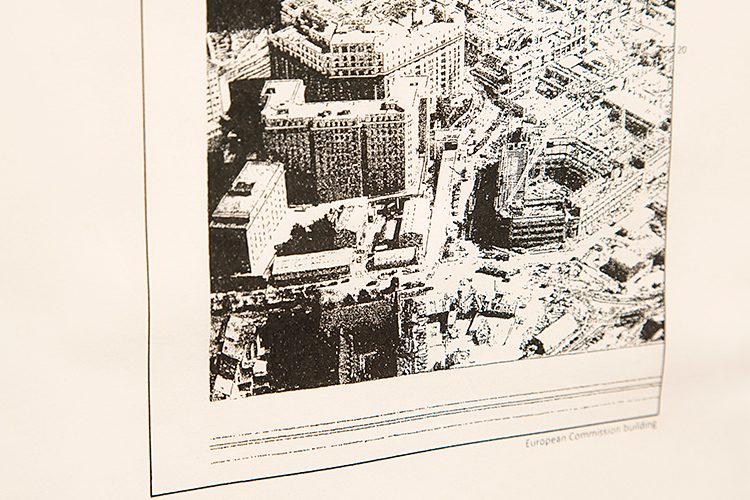 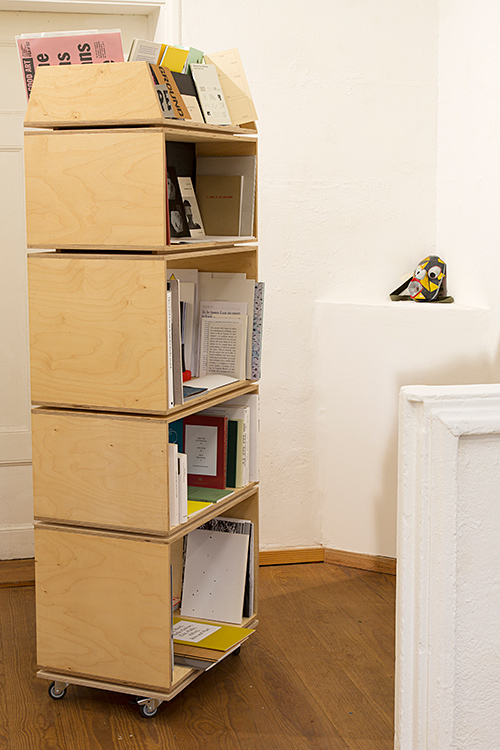 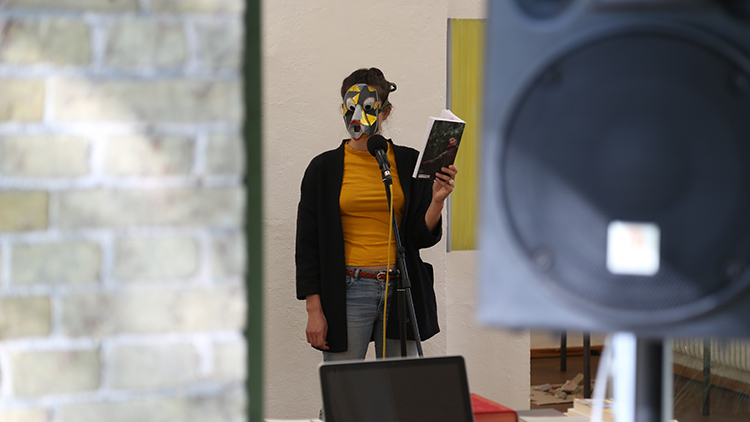 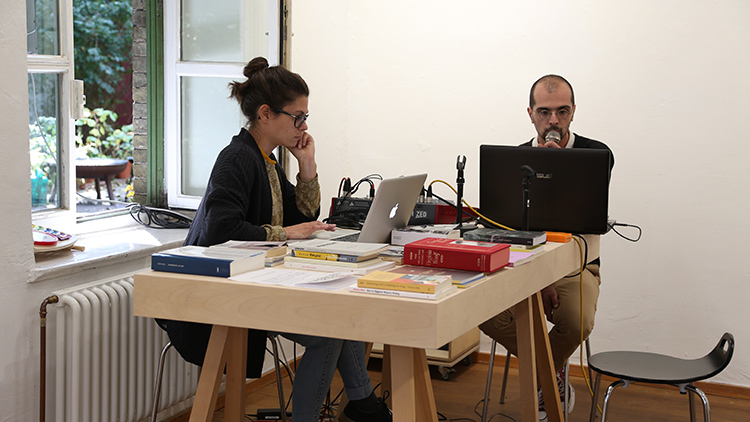 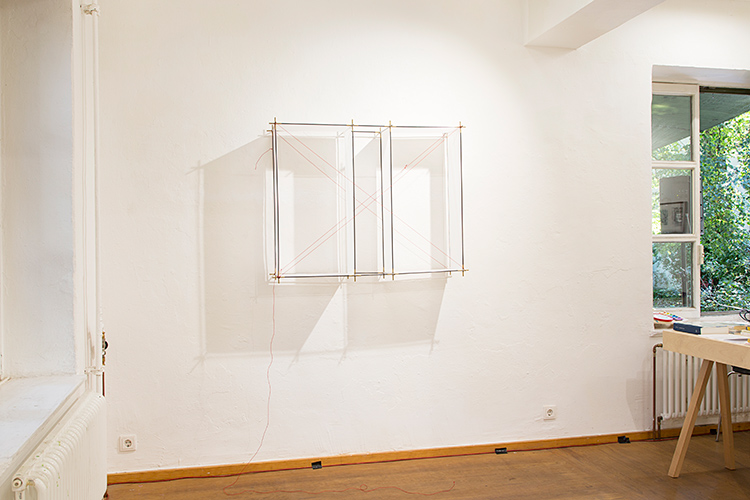 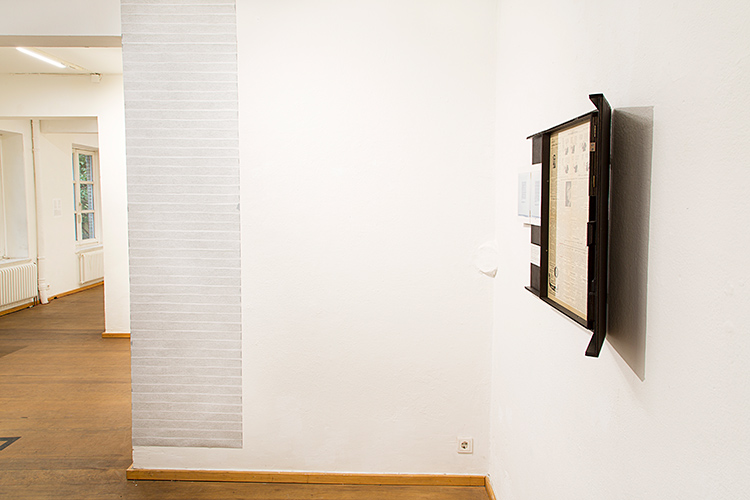